If you’re going to execute a direct mail campaign, give your customers some credit.

Before Christmas, I received an addressed direct mail piece from the auto dealership from which I’d purchased my vehicle several years prior. It made me shake my head with disappointment.

The letter appeared to be a printed version of an internal email from the dealership manager to a salesperson. In it, the manager told the salesperson (“Chad”) that he had a buyer for my specific model of vehicle and that the salesperson should therefore contact me to offer great trade-in value plus some other incentives.

Toward the bottom of the “email,” the manager suggested Chad simply print out the email and mail it to me. The direct mail piece purported to be that printout, with a handwritten sticky note from Chad himself asking me to call him.

Unfortunately it was the latter, and the fact that the dealership tried to trick me has sullied my impression of its brand.

My first clue was the fact that the “email” referred to me as “Ryan G.” Though G is my middle initial, I rarely use it. In any case, I can’t imagine why anyone would refer to me as “Ryan G” and not, for example, “Ryan P” or just “Ryan.”

Then there was the overly detailed language used in the email itself. The manager was really trying to sell his salesperson on offering me a trade-in deal! Finally, I looked closely at the sticky note. Upon closer inspection, even this would-be personal flourish was created with an emotionless computer. 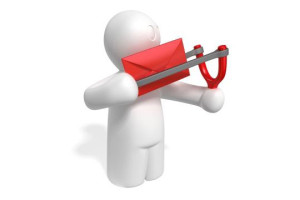 Had a direct mail letter been sent out offering me the same incentives to trade in my vehicle, I may have considered it. But to pull the wool over my eyes and make me think I was being offered a glimpse into some secret email communication that was all about me was a bad move. (Like really, no other customer has the same vehicle model and year as I do?)

Legendary adman David Ogilvy once wrote, “Your customer isn’t a moron; she is your wife.” While he was referring to the attempted hawking of products with little more than a catchy line, it’s equally apt in this case.

Give your customers some credit. Don’t try to fool or trick them. Treat them with respect and they may just become customers for life.

Ryan Parton is a professional copywriter and president of RP Copywriting. For a free consult, visit www.rpcopywriting.com or call 250.702.1103.

Be a better writer – avoid these 13 words and phrases

Cut filler words from your lexicon   Nobody likes to have their time wasted. After…

Boost your search engine optimization today and get the attention you deserve   Aaah, the…

6 Ways blogging can benefit your business

Build trust, exposure and sales with a blog today   Got a business blog already?…