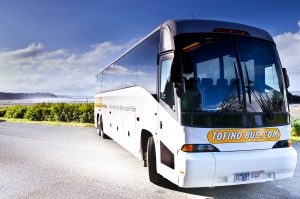 Tofino Bus All Island Express has expanded its service for the summer, offering three daily runs between Victoria/Vancouver, Port Alberni and Tofino/Ucluelet, as well as daily departures from Courtenay and Campbell River.

Summer may not officially arrive until June, but for the Tofino Bus All Island Express, it started May 19.

The new summer schedule, in effect until October 10, is just the latest change for Tofino Bus All Island Express, which took over Vancouver Island routes north of Nanaimo from Greyhound last October. At the time, the company added an additional bus between Victoria and Campbell River and expanded service in the North Island. This will be Tofino Bus All Island’s first summer since launching its “All-Island Express” service.

“It’s pretty exciting now that all of our routes connect with Vancouver; that was something we wanted to make sure we could introduce this summer,” says Tofino Bus All Island founder and president Dylan Green. “It’s never been easier for residents and visitors to get where they want to go, be it across the Island to the West Coast, over to the Mainland or from community to community.”

An interline partner with Greyhound, Tofino Bus All Island Express uses all the same stations and accepts Greyhound tickets and freight.

In addition to the increased runs, the company is prepping for higher summer ridership by adding to its fleet of coaches, all of which are outfitted to take two bikes per departure on a pre-reserved basis. Surfboards are considered to be part of the regular freight, so reservations are not necessary for them.

If the response to last fall’s changes is any indication, Tofino Bus All Island’s new schedule will be a welcome improvement to Vancouver Island bus service.

“It’s been gratifying to hear that residents appreciate travelling with a locally owned carrier,” notes Green. “I think people like speaking to other Islanders rather than a call centre from back east, because we have a good understanding of the intricacies and importance of making those connections – not just with the Vancouver ferries, but also those inter-community connections, such as Cortez/Quadra or Sointula and Hornby/Denman.

“This summer will be the busiest in our 14-year history and we can’t wait to get people moving.”

For route schedules and information on freight, fares and charter services, as well as discounts for online and advance bookings, visit www.tofinobus.com or call 1-866-986-3466.

“It’s great to be downtown.” That’s the consensus of a trio of business owners who…

Property owners looking to appeal their 2017 assessments have until Tuesday, January 31, to file…