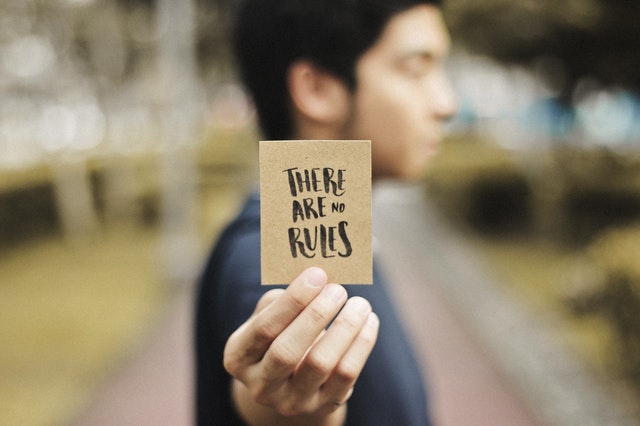 Plus, a couple punctuation guidelines for good measure

Unlike the rules of time travel, sometimes it’s okay to bend the rules of grammar. After all, you’re not going to bump into your past self and wind up marrying your mom.

But break the wrong rules and you might start looking ill-informed or just plain out of it. Who wants that?

The following are some general punctuation and grammar rules that you may not know but probably should. They not only help clarify meaning and intent in your writing but make you seem like you know what you’re doing. And we can all use a little more of that most days.

Order of quotation and punctuation marks

This one can mess people up because things change depending on the punctuation mark used. Commas and periods always go inside the quotation marks. Dashes, semicolons and colons almost always go outside. Exclamation and question marks can do either, depending on the context:

How to use a semicolon

Despite what many high school English students think, a semicolon has two uses. One use is to separate two complete clauses. Essentially it is a fancy period because a complete clause has a subject and verb and could stand on its own as a sentence, e.g., I gave her a call; she didn’t answer.

Its other use is to separate listed items that contain punctuation, e.g., The bus stopped at Vancouver, B.C.; Seattle, Washington; and Portland, Oregon.

As fun as misplaced modifiers are to run across, you don’t want to be the one making the goof up. Misplacing or dangling a modifier can result in confusion when it’s separated from the word being described.

I found a gold woman’s brooch should be I found a woman’s gold brooch.

Subject-verb agreement seems easy enough but can get tricky. If a subject is singular, so is the verb: The dog is hungry. And for plural, same thing: The dogs are hungry.

But when prepositional phrases start modifying the subject, things can get confusing. Should “a surplus of foreign cars” take a singular or plural verb? Even though it sounds plural, the subject is “surplus” not “cars,” so the verb form should be singular. Likewise, when a compound subject expresses a single idea, the verb should be singular. Thus, “The business’ bread and butter is writing,” as opposed to “The bread and butter are in the cupboard.”

Subjects that stand for definable units of money, measurement, time, organization, food and medical problems always take singular verbs. Six months is enough, but five hundred dollars isn’t. And a singular subject followed by phrases “such as,” “together with” and “as well as” takes a singular verb. The real estate tax, together with its conditions, is going to be problematic.

These pronouns always take a singular verb: another, anybody, anyone, anything, either, neither, every, everybody, everything, something, much, each.

The structure of both parts of a phrase joined by a correlative conjunction need to be the same. For example, if you included an article (a, the) in one part, you need it for the other part.

Correct: Either the dog is scared or the cat is crazy.

Incorrect: Both the dog and cat are smelly.

Verb forms also need to be parallel, for example:

I’m not only seeing your bet, but also raise it by $10 is incorrect; raise should be raising.

Good and confused? Well, if you run into trouble, chances are you can Google it – or maybe just call an editor!

Quick – what is content marketing? A little hazy on that, are you? Okay…

Whatever your politics, I think we can all agree that a Donald Trump presidency is…

E-newsletters and why you need to start one

Plus, how to write one that’s “click-worthy” Okay, show of hands: who checks their email…